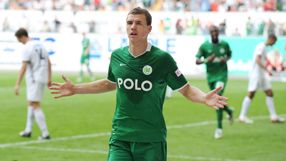 The Bosnian front-man has hit 25 goals in 28 league outings in 2008/09 to fire Wolfsburg to the brink of a first ever Bundesliga crown.

His devastating form is believed to be interesting both Tottenham Hotspur and Arsenal, with the latter's first-team coach Boro Primorac revealing earlier in the season that the Gunners were monitoring the progress of the 23-year-old.

And an end-of-season switch to English shores is now more likely, after the former FK Teplice forward admitted he is unhappy that Wolfsburg coach Felix Magath is leaving for Schalke at the end of the campaign.

"It would be fine to be top scorer in the end, but to win the title is more important," he told Bild.

"However, the whole situation at the club has changed due to the departure of Felix Magath to Schalke.

"I am very disappointed that he is leaving and I will have to consider my options at the end of the campaign."

Plus! Martin Peters on Weekend Wonders and Spurs on Talentspotter