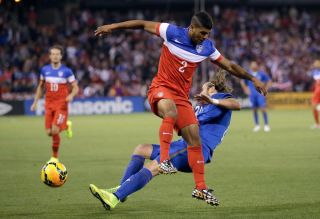 The Premier League club announced the news on Wednesday, with Yedlin set to remain with the Sounders before moving to White Hart Lane in time for the 2015-16 campaign.

Yedlin made three appearances for the United States at the recent World Cup in Brazil - all as a substitute - as Jurgen Klinsmann's men progressed to the second round before an extra-time defeat to Belgium.

And the 21-year-old revealed he had spoken to his national coach about the move to Tottenham after Klinsmann enjoyed two spells at the club in the 1990s.

"I've talked to Jurgen Klinsmann a lot about this move and he supports it, which was one of the big reasons behind the decision," he said.

"It's a great team with a new coach and a style that suits the way I play. That's a big reason I made the decision.

"The facilities are the best in Europe, if not the world. It's a great team. I'm very excited.

"I'm very excited to come to the Premier League and challenge myself against some of the best players in the world."