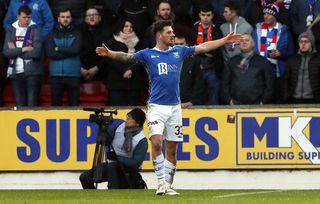 Uncapped St Johnstone winger Matthew Kennedy has been drafted into the Northern Ireland squad for the Euro 2020 qualifier against Holland and friendly meeting with the Czech Republic.

The Belfast-born 24-year-old is the only new face in manager Michael O’Neill’s 25-man party for the games in Rotterdam on October 10 and in Prague four days later.

Hearts full-back Michael Smith returns to the squad after missing last month’s clashes with Luxembourg and Germany through injury.

Linfield striker Shayne Lavery, Motherwell midfielder Liam Donnelly and Cardiff defender Ciaron Brown all retain their places after being called up for the September fixtures.

Norwich full-back Jamal Lewis has been named in the 25 despite suffering an elbow injury in his club’s 2-0 Premier League defeat at Crystal Palace last weekend.

Northern Ireland currently sit in second place in Group C level on 12 points with leaders Germany with both having played five games.