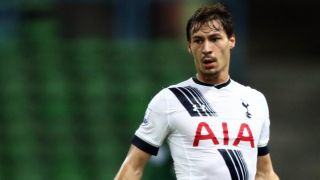 Paris Saint-Germain have signed Benjamin Stambouli from Tottenham after just one season in the Premier League.

PSG made the announcement on Tuesday, with Frenchman Stambouli penning a five-year contract in Paris following the departure of Yohan Cabaye.

Stambouli only arrived in England last season but the lure of French champions PSG and a return to Ligue 1, where he spent four years with Montpellier prior to joining Tottenham, proved too strong for the 24-year-old.

"I am delighted and very proud to become a member of the Paris Saint-Germain family," Stambouli told PSG's website.

"I wasn't necessarily planning to leave the Premier League after one year but when a club with the dimension of Paris Saint-Germain calls you, it makes your choice a lot easier! That's the moment when you can experience the power of attraction surrounding this club.

"I will now focus on my preparation. It will be important to take advantage of the friendly games that we still have to play in the US to find my marks on the pitch."

Recruited by Mauricio Pochettino, Stambouli made 25 appearances for Tottenham in all competitions last term.