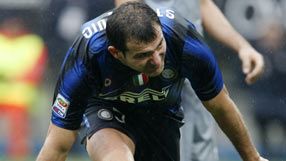 The champions have struggled with injuries and form but after Wednesday's Champions League victory over Twente Enschede, the pressure on coach Rafael Benitez was further eased by a battling, if fortunate, win which sent his side fifth.

"It was a mad game," Benitez told Sky. "We can still aim for the scudetto, the championship still has a long way to run."

Lazio, three points behind Milan, host Inter on Friday unless the Serie A players' union calls a strike over a long running row with the league about contracts.

Juventus, held 1-1 by Fiorentina on Saturday, stayed third after Napoli went down 3-1 at Udinese where Naples-born Antonio Di Natale refused to celebrate after hitting his second hat-trick of the campaign.

Last term's Serie A top scorer netted a penalty, a superb swerving long range effort and directly from a corner after an error by Marek Hamsik, who went straight up the other end to fire in a consolation before missing his own spotkick.

Palermo leapfrogged AS Roma into sixth after overcoming Claudio Ranieri's strangely out-of-sorts side 3-1 in Sicily.

Bologna, awaiting a possible points deduction for financial irregularities, tried to get their game with Chievo on but heavy snowfall meant the match was postponed just before kick-off.

Snow also hit Brescia but their 0-0 draw with Genoa went ahead after a short stoppage to paint the lines red.

Home ultras also came late in protest at the government's imposition of electronic supporter cards to track hooligans and most missed ex-Inter striker Hernan Crespo's opener for Parma when he flicked in at the near post after just four minutes.

Serbia's Stankovic equalised on 18 minutes when his shot from just outside the box took a wicked deflection and moments later he performed exactly the same trick to put Inter ahead.

Four minutes later Esteban Cambiasso stabbed in after Jonathan Biabiany headed on a corner from Wesley Sneijder, who looked almost back to his best before suffering a knock.