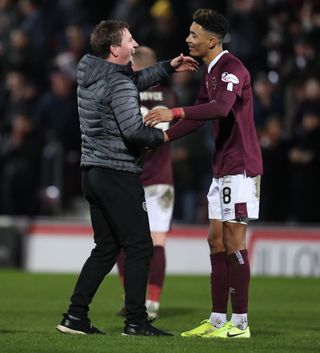 Hearts manager Daniel Stendel feels Sean Clare is well suited to his new right-back role but warned his weekend goal hero that he must do better.

Clare’s standing among the Hearts support was so low that there were significant cheers when he was taken off in Stendel’s first game in charge in December.

But the former Sheffield Wednesday midfielder appears to have rediscovered some confidence after his reinvention as a right-back, a redeployment which was initially instigated through necessity amid a raft of injuries.

The 23-year-old netted his second spectacular goal in three matches on Saturday when he equalised from 25 yards deep into stoppage-time against St Johnstone.

Stendel said: “He brings a lot of things to this position: he is fast, he can defend well, he can dribble well, and he can score goals.

“It’s good for his confidence, his time at Hearts has not always been easy, but he has worked hard to change his view among the supporters.

“But I am also not happy with his performance on Saturday. He scored the important goal and we are all happy about this, but I think he can play better and he has to play better.”

Stendel was baffled by Hearts’ failure to build on their half-time performance and lead in Saturday’s 3-3 draw in Perth but now feels the contrast in fortunes is part of the process towards more complete improvement.

“We lost our head in the second half,” he said ahead of Wednesday’s Ladbrokes Premiership visit of Kilmarnock.

“I said to the players, maybe it’s a process. The good thing is that after 1-0 down we say it doesn’t matter, we play our game.

“But we got our chance in the last second and we used this chance. This is a new view from us that we never give up.

“We are unbeaten in 2020 and came back in this game and we can speak with the team about what we need to do better.”