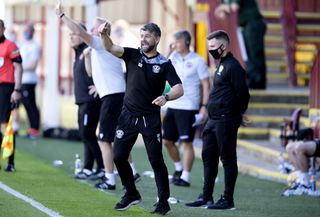 Motherwell manager Stephen Robinson has challenged his side to give themselves another shot at European football.

The Steelmen’s Europa League campaign ended in the third qualifying round on Thursday when they fell to a 3-0 defeat against Hapoel Beer-Sheva in Israel.

Robinson’s men had created the better chances before losing a set-piece goal just before the break, and they missed more opportunities before Declan Gallagher conceded a penalty and was sent off.

The experience convinced Robinson that his side belong at that level and he now wants them to earn a second crack.

“That’s the taste of it,” said Robinson ahead of Sunday’s visit of Scottish Premiership leaders Rangers.

“I think there were only two players in our whole team who had experienced European football – Tony Watt and Stephen O’Donnell, who went out in the first round so it wasn’t too much of an experience.

“So it’s a real naive, young squad. I said to them I want more of that. I’m not quite happy just to plod about in mid-table, we have to aim for the same again. It will be very difficult to replicate but that’s our aim.”

Rangers showed their strength on Thursday with a 4-0 away win over Willem II.

“We have got a way of playing that we think can win football matches and Sunday will be no different,” Robinson said.

“I think it will be an even harder game. I believe Rangers are a better side than what we faced on Thursday so it’s another tough ask.”