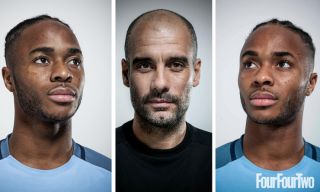 The 21-year-old forward left Liverpool for the Etihad Stadium outfit in a £44 million deal in July 2015 but struggled to match his Merseyside form on the blue half of Manchester last season, netting just six times in 31 Premier League appearances, and only twice in 21 outings in the second half of the campaign.

And Sterling’s hopes of putting his 2015-16 teething troubles behind him weren’t helped by England’s failure at the European Championship, with the youngster heavily criticised for his group-stage performances against Russia and Wales.

However, a couple of days after the speedster had been substituted at half-time of the Three Lions’ dramatic win against Wales, Sterling received a confidence-boosting phone call from incoming Man City supremo Guardiola, who assured him that he was a big part of his plans going into 2016-17.

“This summer was my time to think, really. I said to myself that if I come back, work hard and forget what everybody else thinks, I know what I can do.”

The Pep talk proved to be the tonic that Sterling needed. The wideman started the new season in scintillating form with five goals and six assists in 10 games, and he then helped Guardiola’s new club beat his old one, Barcelona, in a historic Champions League night for the Blues at the beginning of November.

“I’m still the same player that I was before, but I’m a player full of confidence now,” he says.

“As an attacker, he wants you to express yourself and be free, as long as you work for your team-mates when you lose the ball. He told me that every time I get the ball I should go at defenders.

“He’s trying to get that into my head, and it’s good when you know your manager has faith you can create something. It’s stuff I’ve always been able to do – he has just helped me to showcase it on a more regular basis. He’s a fantastic coach.

“The Champions League is the dream for everyone, but we’ve got to take it step by step. We want to be competing on all fronts, in every competition.”

Read more from Raheem Sterling, plus Kevin De Bruyne, John Stones, Claudio Bravo and Steph Houghton, as we go behind the scenes at Manchester City in the December 2016 issue of FourFourTwo magazine and find out about the Blues’ plan for global domination. Also this month: 30 hair-raising tales from Alex Ferguson’s reign as Manchester United manager, when women were banned from football but still found a way to play, inside Southampton’s youth academy, on the road with Plymouth Argyle’s reserves, and a celebration of five long-serving football club employees – from turnstile operators to matchday DJs. Go get it, then subscribe!