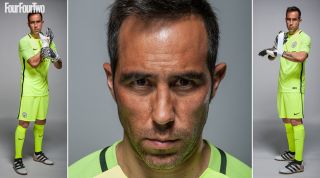 One of new City manager Pep Guardiola’s most high-profile decisions since arriving at the Etihad Stadium was to jettison popular gloveman and England first-choice Joe Hart, with the custodian – who has made nearly 350 club appearances over a decade – joining Italian side Torino on a season-long loan.

Barcelona’s Claudio Bravo was brought in to take his place; the Chile keeper believed by Guardiola to be more adept with the ball at his feet in order to help the team to pass out from the back.

A mistake in the Manchester derby, plus seeing red on his return to the Camp Nou in the Champions League, have made it a difficult start in Bravo’s bid to win over Premier League spectators.

But the man who has led his country to back-to-back Copa America triumphs over Argentina insists he thrives on the pressure at the highest level, and that Guardiola wouldn’t have been signed him if he couldn’t deal with it.

Speaking exclusively in the December 2016 issue of FourFourTwo, Bravo says: “At this level you’ve got to live with pressure. If you don’t deal well with pressure, it would be impossible to play for either Barcelona or Man City, to play for your country or to win titles. You just can’t think about who might have been playing in goal before you – you just have to find a way of performing at the highest level.

“Modern football now requires a goalkeeper who can give the ball to the feet of the centre-backs, not clear it at the first sign of danger. I touch the ball with my feet about 40 times in each game – that begins the dynamic of how we want to play. We don’t have the players upfront to play long ball and nor did we at Barça, so you play to suit your style. We want the ball to go forwards in a clean way, from back to front.”

Bravo won the Treble with Barcelona in 2014-15 but had never played under Guardiola before moving to Manchester City over the summer, having joined the Camp Nou club from Real Socieded two years after Pep had departed.

So the opportunity to work with the man who won 14 honours – including three La Liga titles and two Champions League crowns – in four years in charge of Barça was too good to turn down.

“Guardiola called me and said he believed in me, and it filled me with excitement to be part of this project,” says the 33-year-old.

“When he shows such confidence in you that he is personally requesting your signing, it’s difficult to say no. Logically, Manchester City is more attractive to players with Guardiola in charge, for the style and philosophy he brings.”

Read more from Claudio Bravo, plus Kevin De Bruyne, John Stones, Raheem Sterling and Steph Houghton, as we go behind the scenes at Manchester City in the December 2016 issue of FourFourTwo magazine and find out about the Blues’ plan for global domination. Also this month: 30 hair-raising tales from Alex Ferguson’s reign as Manchester United manager, when women were banned from football but still found a way to play, inside Southampton’s youth academy, on the road with Plymouth Argyle’s reserves, and a celebration of five long-serving football club employees – from turnstile operators to matchday DJs. Go get it, then subscribe!