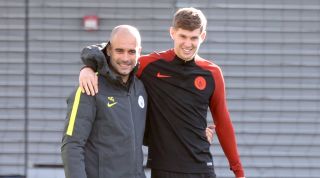 The 22-year-old became the second most expensive defender in football history when he left Everton to join the Etihad Stadium outfit for £47.5 million.

Speaking exclusively in the December 2016 issue of FourFourTwo magazine, the ball-playing centre-back says he made the decision to join City “instantly” as the chance the work with Pep Guardiola was simply too good to turn down.

“For anyone in my position, when Pep wants you to join the club, it’s a no-brainer. He’s the best manager in the world, and to be given the opportunity to learn from him was massive.

“I watched Pep when he was at Barcelona and Bayern, but now that I’m here working with him it’s even better than I expected. He gets us all on the same page, knowing our jobs and responsibilities when we’re on the pitch.

“For any manager, getting that across to the players is one of the biggest things. We all go out there knowing how we want to play and how we should play.”

Stones made more than 80 first-team appearances for the Toffees after arriving from Barnsley for £3m in 2011, and the England international could have moved on 12 months ago with Chelsea bidding up to £38m to land the Yorkshireman.

Everton refused to sell, though, and while Stones admits that seeing the chance to link up with Jose Mourinho's Premier League champions slip away was tough to take, he acknowledges that things have eventually worked out for the best.

“Coming here probably is more suited to my game,” he says. “At the time, the Chelsea situation was difficult. But some things aren’t meant to happen. When it didn’t go through, that was it – I couldn’t do anything about it. You can’t dwell on it too much. I didn’t want to do that, either for myself or my team-mates at Everton; I wanted to keep playing on for them, for the fans and for the club.

“We weren’t always winning matches at Everton, but that’s when you learn a lot about yourself – when you’re going through those difficult times. I’m just really happy to be here now and enjoying my football.”

Read more from John Stones, plus Raheem Sterling, Kevin De Bruyne, Claudio Bravo and Steph Houghton, as we go behind the scenes at Manchester City in the December 2016 issue of FourFourTwo and find out about the Blues’ plan for global domination. Also this month: 30 hair-raising tales from Alex Ferguson’s reign as Manchester United manager, when women were banned from football but still found a way to play, inside Southampton’s youth academy, on the road with Plymouth Argyle’s reserves, and a celebration of five long-serving football club employees – from turnstile operators to matchday DJs. Go get it, then subscribe!