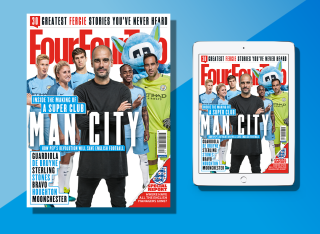 The FourFourTwo team first discussed running a Manchester City cover at the start of last season, to follow up our September 2010 story with the club. Six years ago, the Blues were looking to win their first Premier League title and establish themselves among the elite group of English clubs. With both achieved, we wanted to know what was next. Last season, though, with the first team underperforming in the league and the future of manager Manuel Pellegrini unclear, going back didn't feel quite right.

Then a few things happened. City's U16 and U14 teams enjoyed 9-0 wins over Manchester United and Liverpool respectively; Manchester City Women secured a league (their first) and cup Double, and – ah yes, they brought in Pep Guardiola. So we went behind the scenes with some of City's top stars, including Kevin De Bruyne, Raheem Sterling and Steph Houghton to find out more about the Citizens' plan for global domination.

What we found was a project on a scale we'd never seen before; one that has ramifications for almost everyone – including the English national side. Whether you support City or not, this is a (developing) story you need to read.

In 1921, the FA declared football "quite unsuitable for females" and outlawed the sport. The ban lasted until 1971. As Carrie Dunn explains, for 50 years women found a way to play – but the game struggled to recover. This could be the dawning of a new golden age for women's football, though. All the more reason to be sure to remember the struggles of those involved in shaping the game...

Where have the English gaffers gone?

Once, they were at the forefront of the world game. Now, only four Englishmen are coaching a team in their own nation's top flight. FFT asks if there's any way back...

The perception is that young footballers don't even know what school is. That's not the case on the south coast. In fact, a visit to Southampton's academy shows us that it's quite the opposite: some clubs value progress in the classroom as highly as effort on the pitch...

Everyone knows Alex Ferguson's 26 years with Manchester United brought trophies, racehorses and squeaky bums – but what else? Three decades after arriving at Old Trafford, we reveal 30 insider tales.

Tony Cascarino has always been a bit different. During a life where he has experiences an armed robbery, fights with police and aborted careers as both a builder and a hairdresser, the former striker was a classic football hardman who was once asked by one of his managers to stop wearing mascara. Speaking to FFT in a south London restaurant, Cascarino is entertaining and brutally honest as he answers your questions on his unique career...

This month, FFT's resident columnist Rory Smith tackles the European Super League, and why the big clubs must learn the hard way that they can't have it all.

After an aggressive response to the decision allowing Premier League U23 sides to face Football League teams, FFT asks how Plymouth's reserves are being treated as the only professional second-string side in the pyramid. Hint: not that well.

Star players draw big salaries, but a club is nothing without its staff behind the scene. FFT meets five of the English game's most loyal servants from Oldham, Burnley, Ipswich, West Bromwich Albion and Stevenage, boasting 230 years of service between them.

Southampton striker Charlie Austin talks tricking defenders and finishing with aplomb with us in this month's Performance masterclass.

Available from November 2 in print, on iPad and iPhone or subscribe to FourFourTwo here!