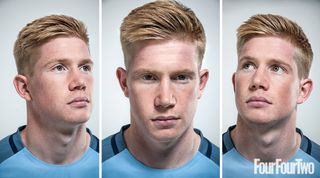 The Manchester City star was handed just three Premier League appearances by Jose Mourinho – spending the 2012-13 campaign on loan at Werder Bremen – before making a permanent move to fellow German outfit Wolfsburg in 2014, going on to win the Bundesliga Player of the Year prize for his stellar efforts.

Ten goals and 20 assists convinced City to spend £55 million on his services and the 25-year-old has continued to shine, scoring or setting up 23 Premier League goals since the start of last season.

And while the former Genk attacker says he has given up wondering why the Portuguese tactician could not find a place for him in his starting line-up at Stamford Bridge, he doesn’t regret his choice to move to west London.

Speaking exclusively in the December 2016 issue of FourFourTwo magazine, De Bruyne says: “I've no idea and I don’t care [why he never won over Mourinho]. I waited four months, then I said to myself that I wanted to play football every week. I couldn’t get the game time I wanted, so leaving was the obvious choice.

“I wanted to start a new chapter – not be loaned out and come back to the exact same situation. It was a really smart move on my part. But of all the choices I have made in my career, I don’t regret one of them – even going to Chelsea. It didn’t work out. I wanted to play football; I didn’t; so I left.”

De Bruyne’s buoyant start to 2016-17, which has already included scoring in victories over Mourinho’s Manchester United at Old Trafford and Barcelona, has seen him installed as an early favourite for the PFA Player of the Year award.

But the Belgian insists that he’s focused on bringing more titles to the Etihad Stadium as the Blues continue to prosper under new boss Pep Guardiola.

“I’m not thinking about being the best player in the league,” he says. “I want to win titles. That’s more important.

“It’s not like he [Guardiola] has changed a lot – football is still football – but it’s his eye for detail that counts.

“Not everybody goes full length on every detail, but he does. All the little things, like physical work, injury prevention and diet, he does to get people fitter.

“When he speaks to me, we speak about everything. It is not always football: he also speaks about family and life out of football. It’s not always ‘focus, focus’. He was a player himself so he’s very good at knowing the balance of when to joke and when to be serious. Before a game he’ll be really quiet: he does his meetings a couple of hours before the match, and then we are doing stuff on our own. By then, everybody knows what we need to do.”

Read more from Kevin De Bruyne, plus Raheem Sterling, John Stones, Claudio Bravo and Steph Houghton, as we go behind the scenes at Manchester City in the December 2016 issue of FourFourTwo and find out about the Blues’ plan for global domination. Also this month: 30 hair-raising tales from Alex Ferguson’s reign as Manchester United manager, when women were banned from football but still found a way to play, inside Southampton’s youth academy, on the road with Plymouth Argyle’s reserves, and a celebration of five long-serving football club employees – from turnstile operators to matchday DJs. Go get it, then subscribe!