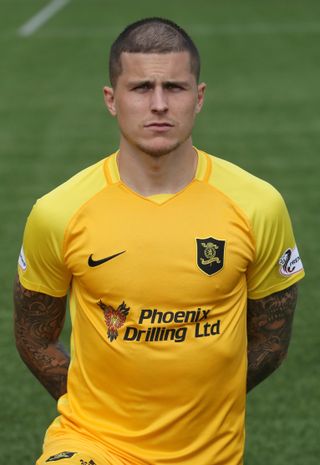 Steve Clarke has warned Lyndon Dykes he will have to fight his way past Oli McBurnie before he can claim a Scotland jersey.

The new QPR forward has turned his back on Australia to commit to Clarke’s squad.

The 24-year-old – born Down Under to Scottish parents – is now hoping to win his first cap next month after being called up for the first time ahead of the Nations League double-header with Israel and the Czech Republic.

But while Clarke was delighted to have the former Livingston player on board just a week after seeing him seal a £2million switch to Loftus Road, he is just as excited about McBurnie’s current form levels.

The Sheffield United striker has found himself on the sharp end of some Tartan Army stick having failed to net in his nine international appearances to date.

But with six Premier League goals – including two following the Blades’ return from lockdown – Clarke reckons McBurnie is ready to prove himself to the Hampden faithful.

He said: “We’re talking quite a lot about Lyndon Dykes. We’re overlooking a little Oli McBurnie, who had a fantastic first season in the English Premier League with Sheffield United.

“Oli was a big player for them. I watched a lot of their games and he did very, very well.

“Yeah it’s great to have Lyndon on board but let’s not forget the other players we have.

“I don’t really read the stick that players are getting. I judge them on my own eyes and their merits. I thought Oli did well last season for Sheffield United and if he can bring that form into the international stage then he will be a big player for Scotland now and in the future.”

The Jambos do not kick off their Scottish Championship campaign for another six weeks and Clarke reckons now is a good time to look at the next generation of stoppers.

He said: “Robby first took my notice when he was at Morton. I thought he did well there.

“He obviously stepped up to Livingston last season and had a good second half to the campaign. He’s gone back there on loan again this year.

“I’ve got some really good options in goal. I’ve got David Marshall who has been number one for me.

“Jon McLaughin has gone to Rangers and got himself in the team there with a few clean sheets and good performances. Having watched the games he’s not had an awful lot to do in the games but has shown good concentration and awareness.

“If I needed Craig Gordon and he’s back in the Hearts team playing week in, week out as I know he can play, then he’s another option.

“But at some stage you have to look towards the future a bit and Robby is one of our younger goalkeepers.

“Liam Kelly wasn’t in the QPR team at the end of last season. Craig MacGillivray lost his place at Portsmouth so it just seemed like an ideal time to bring young Robby in and have a look at him.”