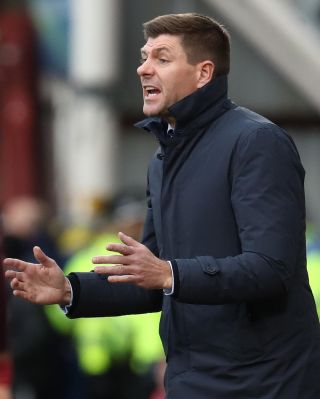 Steven Gerrard admits he has never seen Rangers play worse in his 100 games in charge than they did at Tynecastle as he warned a repeat display will kill off their title hopes.

Gerrard was hoping to celebrate a century of games in charge of the Light Blues with victory in the capital.

But instead it was Hearts manager Daniel Stendel who lapped up his first Ladbrokes Premiership win since replacing Craig Levein.

Rangers were second best across the pitch but did grab the lead early in the second half thanks to Ryan Kent’s sixth goal of the season.

But the lead did not last long as Steven Naismith returned to haunt his old side with the equaliser, paving the way for Liam Boyce to grab a late winner just 24 hours after sealing his £150,000 return to Scottish football from Burton.

The defeat fired up the Jambos’ belief that they can fight their way to safety as the basement boys clawed themselves to within a point of Hamilton.

But Rangers have little wiggle room left after falling five behind leaders Celtic, albeit with a game in hand.

Gerrard said: “We got what we deserved in terms of the outcome of the game. It’s probably the first time in 100 games that I haven’t recognised us in and out of possession.

“Right now, it’s a concern and a worry. I look at our performances at Motherwell, Livingston, Hibs and Celtic Park – they were the complete opposite to what I saw today, both with and without the ball.

“Today, I could pick eight players that I didn’t recognise – who were passengers. In 100 games, I’ve never sat here and said that.

“Celtic were waiting for us to blink. Today we’ve blinked. Big time.

“I’m not sure there will be too many blinks from now to the end so we need to try to avoid that level of performance from now until the end of the season.

“Otherwise we might not even be in a title race – never mind competing for the league.”

And Gerrard admitted his team will now have to face questions about their bottle.

“I totally understand it, sitting here right now,” he said. “Do they have it? Before today, I would have said they did. Now? I don’t know. We’ll see. We’ll see in our reaction.

“If I take the emotion out of how I’m feeling right now, yes, I do feel we’ve got the bottle. That’s my job now, to reset it and go again.”

Gerrard was forced to replace Ryan Jack and Jon Flanagan at half-time, with Jack now a doubt for Ross County on Wednesday.

And he quipped he is ready to re-think his recruitment plans in the final week of the transfer window after sitting through his side’s abject display.

“On the evidence of today, I’d like to bring eight in,” he said. “But it doesn’t work like that.

“These players, over the 100 games I’ve been in charge, have more often than not been a delight to work with.

“And they’ve had praise for getting it right. Today we all deserve criticism.”

Stendel was overjoyed to see his side end a 10-game league run without a win as he paid tribute to new signing Boyce.

The German said: “I am very happy that the players got success for their hard work. It’s time we changed the situation in the table.

“Liam came in late on Saturday and did not train with the team. We were convinced he is the right player in the right place for us.

“The goal is the reason why signed him. He has the right personality for our team and can be an important player.”