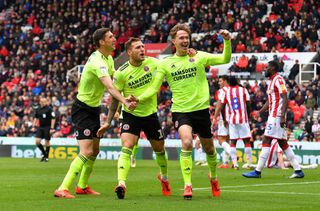 Already assured of automatic promotion from the Sky Bet Championship, United had to settle for a point and the runners-up spot behind Norwich, who won at Aston Villa.

Forward Sam Vokes opened the scoring for Stoke with a well-struck volley after 19 minutes before substitute Kieran Dowell equalised three minutes into the second half.

Ryan Shawcross’ put Stoke back in front from close-range prior to Stevens’ late leveller which saw Chris Wilder’s promoted Blades end their stellar season with a point.

The first effort of the fixture came when midfielder James McClean created space for himself in a central position before flashing a right-footed shot across goal and past the post of visiting goalkeeper Dean Henderson.

At the other end, David McGoldrick’s 25-yard low left-footed attempt did not trouble Jack Butland in the hosts’ goal.

Nathan Jones’ Potters were in front with 19 minutes played through Welsh international Vokes, who chested the ball down on the edge of the penalty area after defender Jack O’Connell failed to clear, before thumping a right-footed volley which beat Henderson to find the bottom left-corner.

As the first-half drew to a close, Wilder’s promoted side almost drew level after left-back Stevens’ cross fell to captain Billy Sharp – however his right-footed effort from 10 yards deflected off Shawcross and hit the bottom of the left-hand post before being cleared to safety.

The South Yorkshire club were back on terms within three-minutes of the restart after Dowell’s low left-footed shot drifted into the bottom right-corner past Butland, to the delight of the 2,903 away supporters who had travelled from the Steel City.

Stoke regained the lead midway through the second half after Shawcross hooked in right-footed from the left-side of the six-yard box following Tom Ince’s corner.

Butland then twice came to his side’s rescue late on, pushing McGoldrick’s header over the bar before keeping out a long-range John Fleck effort with his left foot.

United grabbed a point with 13 minutes remaining following a swift team break-away, Sharp squared the ball to Stevens on the left-side of the area, with the Irishman composing himself before drilling low left-footed across Butland and low into the net.