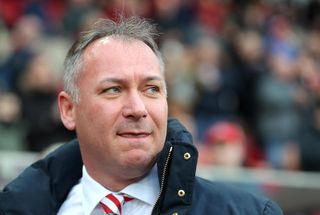 Sunderland owner Stewart Donald has insisted he is not looking to make a quick profit from selling the club.

Donald’s comments came as details of the manner in which he and executive director Charlie Methven sealed their takeover last summer emerged.

It was rumoured the pair only paid around £5million up front when they agreed a £40million deal with previous owner Ellis Short, with the remainder understood to be guaranteed against the parachute payments the Black Cats were due to receive following their relegation from the Premier League.

However, a newspaper report on Thursday suggested the parachute payments have been used to pay off Short and that Donald, who initially bought a 94 per cent stake in the club, but has since sold 20 per cent of it to Uruguayan businessman Juan Sartori, and Methven would make a huge profit if they were to sell.

However, Donald said in a statement: “I have been clear from the outset that we bought the club at a rock-bottom price because of the dreadful financial state it was in.

“If I simply wished to make money out of Sunderland, we could have skimped on investment in the playing staff. And, we could have accepted Ellis’ offer to port a large portion of his previous debt onto our company, kept the details of the purchase more confidential and sold the club in its entirety – for which I have had plenty of big offers.

“Instead, I have been as open and transparent as possible with the fans and I am clear that I wish to retain a significant investment in the club for the long-term. The notion that I am going to leave Sunderland in the short-term, having made a quick profit, is simply wrong.”

There is no suggestion that Donald and Methven have broken any rules, although with League One play-off finalists Sunderland now effectively debt-free, they have become a much more attractive proposition and there has been persistent speculation that interested parties are circling.

Donald confirmed his company Madrox Partners Limited had agreed to pay Short £40million, with last summer’s parachute payment covering £25million of the total, and revealed that the club had debts of around £150million on his arrival.

He said: “Just over a year ago, Sunderland was in very poor condition, both on and off the field. Twelve months on, the club is debt free and is in a position to come close to break even over the next 12 months.

“Furthermore, I am now in the process of ensuring that there is the appropriate level of investment available to provide competitive playing budgets on an ongoing basis.”