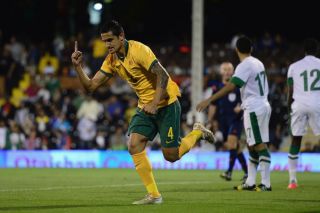 Cahill - Australia's all-time leading goalscorer - has been called up by national team coach Ange Postecoglou for upcoming international friendlies against the United Arab Emirates and Qatar.

Those two fixtures will be played on October 10 and 14 respectively as Australia step up their preparations for the AFC Asian Cup in January.

It means Cahill will miss New York's home match against rivals Toronto on October 11, while the 34-year-old is in doubt for the Columbus Crew's arrival eight days later as the Red Bulls - fifth in the Eastern Conference - target the play-offs under Mike Petke.

Cahill has already spent time away from New York on international duty this season, missing four MLS games as Australia prepared and competed at the World Cup in Brazil.

However, 73-cap veteran Cahill made it clear where his priorities lie as he attempts to balance duties for both club and country.

"This year, it is difficult," Cahill told reporters on Friday.

"In the amount of games I have had to go away and travel and still make myself available [for New York] when I shouldn't have... everyone is happy when you do well in a World Cup, but when you come back and you leave again... we shouldn't be in this situation anyway.

"We shouldn't be fifth and a point away from dropping out. We should be comfortable. If you look at the season, it's down to our own fault.

"For me, [balancing club and country] doesn't matter. It is what it is.

"Coach makes the decision and he has to live by it. If [the Red Bulls] are upset that I go on international duty, I have stated before coming to this club that [Australia] was my main focus.

"It was stated to the MLS. It is what it is; I don't make the FIFA dates the same as every other FIFA date. It's a pleasure to play for your country."

Cahill added: "I am 34 now. I don't need to worry about people [telling] me about international football.

"Likewise with the club, I had it at Everton, and David Moyes, one of the most influential managers in the world. If I could deal with it with him, no comment if it can't be dealt with here.

"Put yourself in my situation. I went to a World Cup as the oldest player [for my team]. My country looks up to me to lead the team every time I play. Pivotal in qualifying. Pivotal in World Cup. Being a good ambassador.

"I led the line from the front last year here at New York Red Bulls every game. Put my body on the line numerous times and we won a Supporters' Shield. The same I would do with my country."