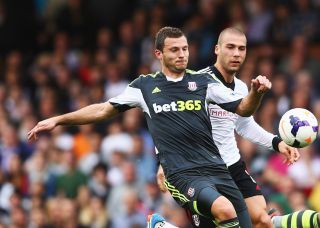 The Netherlands international was the subject of criticism from Fulham fans during Stoke's 1-0 defeat to Martin Jol's side before the international break, after going to ground when Pajtim Kasami appeared to swing a hand towards his face in an off-the-ball incident.

Pieters was accused of going down too easily during the incident, but he has insisted that Kasami should have been sent off for the offence.

Speaking to The Stoke Sentinel, Pieters said: "It was a red card because he hit me in the face.

"There was contact, no question for me, and I am not going down on the ground for nothing."

Pieters - who joined from Eredivisie outfit PSV Eindhoven in the close-season - has started all seven of Stoke's Premier League matches this term.

The club headed into the international break on the back of three straight league defeats, but the full-back is keen to build on a strong second-half showing at Craven Cottage when their league campaign resumes against West Brom next weekend.

"If  you lose a game, you cannot wait for the next game to recover and show what you have got," he continued.

"It is hard for us when you see the Fulham game. In the second half we were stronger and waiting for the goal.

"Then it is so hard for us to take when we lose the ball in our half and they score."