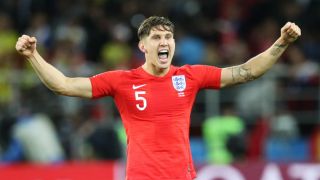 Stones has been widely recognised as one of England's best performers at the showpiece tournament, having played every game in their unexpected run to the semi-finals, where they lost 2-1 to Croatia.

The 24-year-old is hopeful of returning to Manchester City in time for his club's Community Shield clash with Chelsea but wants to come back to the Premier League champions as an even better player.

"I will watch all the [England] games back in my own time, what we did at both ends of the pitch, because if you don't score goals you don't win games and if you don't keep clean sheets you don't either," he said.

"That's the harsh reality of it when you play against the very highest level.

''It's always good to self-analyse and be critical. That is how I have got through so far and improved. You've got to be harsh on yourself because it's the only way you are going to get better by studying those situations where you may have fallen short."

Stones is also proud to have played in all seven games for England at the tournament, having not featured at all two years ago at the European Championships.

"I'm just so happy to have played in every game. I tried my best and have given everything for the team," he said.

"I wanted to play every game. It was difficult in France two years ago. I know how it felt not to play a game, so I know how the boys who don't get much game time feel.

"But they were all right behind us like I was back then. Everyone played their part."

England eventually finished fourth at the World Cup after losing 2-0 to Belgium in the third-place playoff on Saturday.