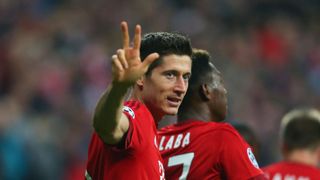 Robert Lewandowski may have scored 10 goals in his last three games for Bayern Munich, but Gordon Strachan says Scotland are not afraid of the Poland striker.

Strachan's men will come up against the in-form Lewandowski in Euro 2016 qualifying next week as they look to reignite their push for a place at next year's finals.

Lewandowski has scored 10 goals in just eight qualifiers so far in the campaign, but Strachan says last October's 2-2 draw between Scotland and Poland in Warsaw - in which the 27-year-old failed to net - proved he can be stopped.

"People point out that they have Lewandowski and that's true but they have not beaten us yet," the Scotland boss said.

"You can take it as a sign of his [Lewandowski's] brilliance, being sometimes that wee bit quicker than anyone else, a sign that we're worried when he gets the ball.

"For every good player, you want to make teams scared.

"But we're not scared of him so long as we do our unit work well. And if we keep the ball longer than them then we'll restrict his chances.

"It's about cutting his supply off and keeping the ball ourselves because if we keep the ball longer than they have it then the less chance there is of Lewandowski doing something to hurt us."