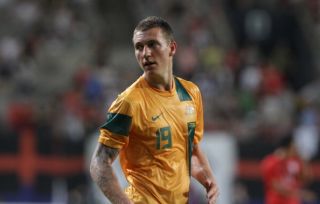 Mitchell Duke made his senior international debut and scored two goals in three games for Australia at the East Asia Cup tournament in South Korea last month, winning him a spot alongside more established players for the game against Luiz Felipe Scolari's team in Brasilia on September 7.

Oseick appears to have ignored some players' lack of recent game-time, opting for the strongest squad at his disposal for what will be a major test of the team's ability against the 2013 Confederations Cup winners.

Like Duke, defender Ryan McGowan also performed well in Korea and has retained his place in the squad, with goalkeepers Mat Ryan (Club Brugge) and Mitchell Langerak (Borussia Dortmund) getting the nod.

If he does field close to a full-strength team, Osieck is likely to keep faith with first choice shot-stopper Mark Schwarzer, despite the veteran's limited playing time since joining Chelsea.

Langerak is also second choice at Bundesliga giants Dortmund, while Ryan has been starting regularly in his first season in Belgium.

Middlesbrough captain Rhys Williams has been included, although he and McGowan are likely to find themselves behind Lucas Neill and Sasa Ognenovski in the reckoning to play at centre-back.

Some members of the squad, such as Tim Cahill (New York Red Bulls), Mile Jedinak (Crystal Palace) and Tommy Oar (FC Utrecht), have been competing regularly in Europe, North America and Asia.

But Osieck has also opted to call on players whose domestic seasons are yet to resume, with Middle East-based trio Mark Bresciano (Al Gharafa), Brett Holman (Al Nasr) and Ognenovski (Umm Salal) likely to be lacking match practice.

The same applies to the A-League players chosen in the squad, with Melbourne Victory duo Archie Thompson and Mark Milligan, Brisbane Roar's Matt McKay and Duke all still more than a month away from the 2013-14 season kick-off.