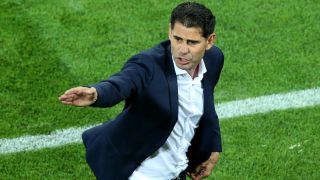 So far, this World Cup could certainly have gone worse for Spain, but they will be praying things get better.

Monday's 2-2 draw with Morocco raised more than a few eyebrows but it was not quite enough to deny them a place in the last 16 in Russia. Iran's last-gasp equaliser against Portugal even means La Roja will, somehow, progress as winners of Group B.

There were also some aspects to admire about their performance in Kaliningrad, chief among them the display of goalscorer Isco, who has become the most important player in a squad bursting with serial winners.

However, it's often said 'the real work' starts in the knockout phase of tournaments and, for Spain and Fernando Hierro, that is irrefutable.

Hierro was thrust into the position as de facto head coach after Julen Lopetegui's dismissal, despite almost no experience in such a role, largely because he knows the team and the Spain set-up so well and is a figure who commands huge respect from the players. But the former defender, whose name translates as 'iron' in English, needs to find a way to shore up this most brittle of backbones.

In truth, they should really have won the game against Morocco. They had 75 per cent of the possession and 18 shots to their opponents' six. The injury-time equaliser from Iago Aspas was only awarded after a VAR referral but justice was done there, just about.

However, for all the intricate play between Isco, Andres Iniesta and David Silva, for all the territorial dominance the high defensive line grants them, they are looking eerily like the side who shipped seven goals as they went out at the group stage in 2014.

The first for Morocco came from the kind of rare sloppy pass from Iniesta that makes the average viewer do a double-take. It certainly caused Sergio Ramos to dither, allowing Khalid Boutaib to stride through and beat David de Gea with ease. Iniesta made amends to set up Isco for a sublime equaliser but the warning signs persisted, with Nordin Amrabat inches away with a spectacular that rattled the crossbar.

12 - Isco has been directly involved in 12 goals in his last 15 international appearances for Spain, scoring 10 goals and assisting a further two. Magician. June 25, 2018

De Gea did not move for that strike and the image of the stranded Manchester United star, staring after the ball as it flew past, just as he did when Cristiano Ronaldo scored Portugal's late equaliser in the opening match, rather sums up his recent form. Ever since his error in the friendly draw with Switzerland, De Gea has looked surprisingly unsettled, and the goal from Boutaib was the fourth he had conceded at these finals from only four shots on target.

Ramos and Gerard Pique look rattled, too. Pique was fortunate perhaps not to be sent off eight minutes in for an ill-conceived lunge, while Ramos, at fault for the first goal, was emphatically beaten in the air by Youssef En-Nesyri for what looked set to be the winner.

Aspas spared them defeat and set up a clash with the host nation in the next round, but his clever back-heeled finish will do little to disguise the concerns about this team. They are a supremely talented, experienced group of players who look as though they are becoming weaker by the day, as though Lopetegui's loss was a slow-release poison seeping into the camp.

Playing from memory will probably be enough against Russia, whose bubble was burst by Uruguay earlier, but strength through leadership is the only way this Spain side will challenge for a second World Cup triumph. The time has come for Hierro to show his mettle.