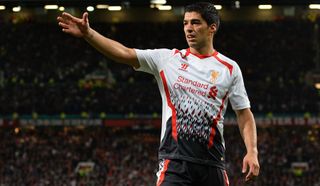 The former Chelsea forward is currently joint top of the Premier League's scoring charts, with four goals, while Suarez is set to make his Premier League return at Sunderland on Sunday - having served a 10-match ban for biting Branislav Ivanovic in April.

Following Suarez's return to first-team action in the 1-0 League Cup defeat to Manchester United on Wednesday, Pascoe feels the pair can complement one another.

"Sturridge has been superb up there on his own and he's got the goals and worked hard for the team. With Luis coming back in, we're all excited about it," he told the club's official website.

"Straightaway we've got a world-class striker coming back in."

Suarez had looked set to leave Anfield during the close-season, with the Uruguay international stating his desire to move away and Arsenal seeing two bids rejected.

However, Pascoe maintains the 26-year-old is fully focused on helping Brendan Rodgers' side.

"He's a great lad and he's very committed to the team and to Liverpool. The way Luis plays, he'll create chances and I'm sure that he'll score many goals," he continued.

"His return has given us a boost at Melwood. He has of course been around and he's been training over the last few months.

"But once we knew that we had a date he would return for, the players couldn't wait to get their arms around him and welcome him back into the side."