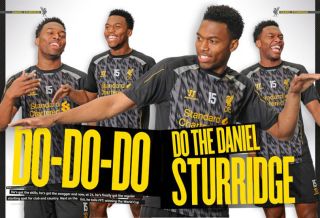 The 24-year-old brought his stop-start four-year Blues career to an end in January 2013; leaving Stamford Bridge for Anfield in a £12 million move.

Sturridge has not looked back since, netting 19 goals in just 26 Premier League appearances before an ankle injury halted his momentum at the end of November.

He therefore jumped at the chance of a fresh start under Brendan Rodgers, who Sturridge had encountered in the past playing in the FA Youth Cup.

Speaking exclusively in the February 2014 issue of FourFourTwo, Sturridge says: "I first met [Rodgers] when I was at Man City and we played his Chelsea team in the Youth Cup. We beat them, so I've had a good time reminiscing with him about that!

“It was easy [to leave Chelsea]. I was ready to go and wanted to further my career. When Liverpool came knocking there was only one outcome.

“Liverpool are an unbelievable club with great history... it wasn’t a case of “Should I go?”; it was more like “When can I come?” When they put the bid in for me I was just thinking about getting myself up the motorway as fast as possible!”

Read the full interview with Sturridge in the February 2014 issue ofFourFourTwo, which includes a world exclusive inside the world’s best team, Bayern Munich. FFT talks to Pep Guardiola, Philipp Lahm, Thomas Müller, Arjen Robben, Mario Götze and Thiago Alcantara. We also meet Coventry City’s promising stars keeping the clouds at bay for the Sky Blues and sit down with Juventus great Alessandro Del Piero for a One-on-One. Available now, in print or in a specially-designed-for-iPad version.