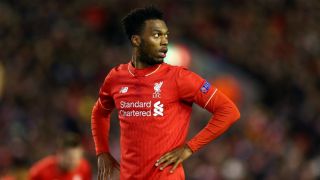 Liverpool forward Daniel Sturridge is brimming with confidence ahead of the new season and aims to improve on his impressive goals-per-game ratio for the Anfield side.

The England international has netted 53 times in 92 appearances in all competitions since leaving Chelsea for Liverpool in 2013, establishing himself as a regular with club and country.

Sturridge found the back of the net on 13 occasions last season despite some injury problems, but now fully fit he has promised more goals in the years to come.

"I think my goals-per-game ratio will be better [in 2016-17]," Sturridge told the official Liverpool website.

"It's important that I continue to focus myself, and with my team-mates and the new players we've signed at the club it's possible to improve it. As long as you have service as a striker, you'll be able to score goals because you have chances. As long as I get chances in games I'm sure I'll score.

Sturridge is adamant his team-mates will have to step up their game as well, though, and is confident Liverpool can challenge for top honours if they can do just that.

"But not just for myself, everyone has got to step up and do their job as well, players getting assists and the defence keeping clean sheets," the 26-year-old added.

"As the manager always emphasises, it's a team game. It's important that everybody does their job and if everyone does their job then we'll be successful.

"I'm looking forward to the season and I think the signings we have had will help us push onto the next level."