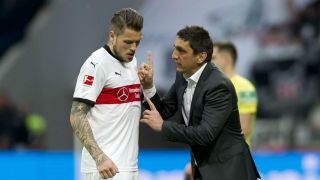 Tayfun Korkut has been rewarded for guiding Stuttgart to a seventh-place finish in the Bundesliga with a new two-year contract.

Korkut, 44, was appointed in January with Stuttgart 14th in the table, initially signing an 18-month deal.

But few would have predicted the impact of the Stuttgart-born former Turkey international, as he presided over nine wins in 14 Bundesliga games, suffering just one defeat in that time.

And sporting director Michael Reschke has no doubt that Korkut and his staff are deserving of their extensions after a "quite exceptional" start to life at the club.

He told Stuttgart's official website: "We have an excellent coaching team, spear-headed by Tayfun Korkut, and we are very happy to have been able to extend the deals with him and his assistant coaches Ilija Aracic and Steven Cherundolo earlier than anticipated, until 2020.

"The sporting success in recent months has been quite exceptional. But aside from that, the professionalism which the three have brought to the club, along with the harmony and ambitiousness within the team and amongst the staff, which they initiated, has proven equally important in our decision to continue our cooperation."