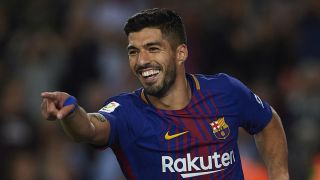 Luis Suarez accepted a mixed outing in front of goal would be the price to pay for rushing back to play in Barcelona's 5-0 derby romp against Espanyol.

Lionel Messi was the toast of Camp Nou after again tormenting Barca's city rivals, taking his tally to 18 against Espanyol in LaLiga with a superb hat-trick.

Gerard Pique got in on the act with an 87th-minute header before record signing Ousmane Dembele, off the bench for his debut, laid on Suarez for a simple finish to complete the scoring.

The margin of victory could have been greater but for Suarez misjudging a clutch of second-half chances in his first LaLiga appearance of the season.

The 30-year-old suffered a knee injury during Barca's Supercopa de Espana defeat to Real Madrid last month but joined up with Uruguay during the recent international break – only to provoke further fears over his fitness by pulling up with calf cramp in the 0-0 draw against Argentina.

He started the subsequent win over Paraguay but still appeared rusty back in domestic action, missing several chances before scoring, as Barca maintained their 100 per cent start the LaLiga season to open up a four-point advantage over Real Madrid.

"You're out for 10 days without doing very much, you know you lose a little bit of [muscle] tone," Suarez told reporters.

Luis Suárez: "Three important points to keep the team on their way" September 9, 2017

"That's why I played for the national team. It was important to get my fitness back

"This is a game where I knew I would have to find my sharpness and my rhythm.

Suarez was little doubt that Messi was the hero of the hour and handed his team-mate familiar plaudits.

"He's the best player in the world and it's a privilege to play with him," he added. "We keep saying this day after day, game after game. It's just Leo."