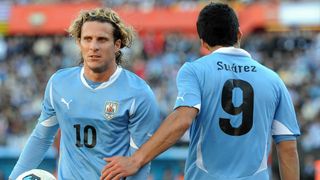 Luis Suarez does not owe Uruguay anything following his actions at the 2014 World Cup, according to former international team-mate Diego Forlan.

Suarez was handed a nine-game international suspension and banned from all football-related activity for four months after deliberately biting Italy defender Giorgio Chiellini in their group-game fixture in Brazil.

The suspension saw Suarez miss Uruguay's round of 16 tie against Colombia - which they lost 2-0 - as well as their entire 2015 Copa America campaign.

The 29-year-old made his return after a 20-month lay-off in March this year, scoring on his return in a 2-2 draw against Brazil in their 2018 World Cup qualifier.

However, despite missing almost two years of action for Uruguay, Forlan believes Barcelona star Suarez is not indebted to the country and national team.

"No, he doesn't owe us anything. We're thankful for his talents and commitment to the national team," the former Atletico Madrid and Manchester United striker told ESPN.

"He's in a good moment and he has another opportunity to do well for his country. He's doing really great at Barcelona, playing alongside the best player in the world, [Lionel] Messi.

"That makes it easier to play when you are surrounded by the best, but Luis is one of them.

"He was the top scorer in Spain last season, the first to win the Pichichi apart from Cristiano Ronaldo and Messi since I won it in 2009."

Forlan, who represented Uruguay 112 times across 12 years, added: "I saw him go from being a 17-year-old to being my partner on the pitch. He's 'aguerrido' - a warrior. From the first time I saw him as a youth player to now, he's had that fighter spirit.

"He would ask me advice and ask me about the teams I played for in Europe. He'd ask me about goals I'd scored and players I'd played with at United, Villarreal or Atletico. Now I'm the one asking him what it's like to play with Messi and Neymar!

"Luis has improved as a player. His timing is better now, his confidence is up. He has a different quality from Messi and Neymar. Fans love him because he's a strikers' striker who scores a lot of goals."

Suarez is carrying an injury heading into the upcoming Copa America Centenario in the United States, which begins on Friday, but is expected to be back if Uruguay advance from their group against Mexico, Venezuela and Jamaica.