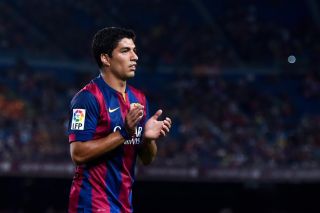 The Uruguay star has featured just once since the World Cup - in a friendly against Mexican side Leon - after receiving a four-month ban for biting Giorgio Chiellini while on duty in Brazil.

Suarez's competitive debut for Barca is set to come in next month's Clasico clash with Real Madrid at the Santiago Bernabeu, though he is likely to be lacking match sharpness when that date rolls around.

But the former Liverpool man will have a chance to boost his fitness when an Indonesia XI visit Barca's training ground for a game on Wednesday.

Barca boss Luis Enrique explained at a press conference on Tuesday: "From a coach's point of view it is beneficial that he plays. This one is a bit different because it is not with his team, but the youth team and against another Under-19 team.

"There are a lot of caveats, but we have spoken and the player wants to play despite it being in a different context and so he will play the minutes [Barca B coach] Eusebio thinks best."

Luis Enrique was speaking ahead of the first team's meeting with Malaga, also on Wednesday, and also discussed members of his squad who have struggled for selection so far, especially Marc Bartra, who has featured in just 44 minutes of La Liga action so far this season.

"I'm unfair to them all. The problem is not mine," Luis Enrique added.

"I have endless possibilities and I'm always looking for the benefit of the team.

"I'm delighted for Barca because they have a new level of player and for me I have another approach that is not right or wrong but that is what it is being a coach."