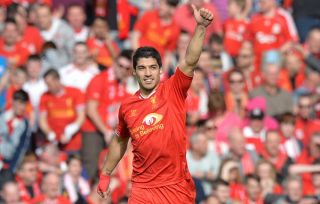 Brendan Rodgers' side have been in superlative form in the second half of the season, currently enjoying an 11-match winning streak in the league - a club record.

Seven points from their remaining three fixtures - against Chelsea, Crystal Palace and Newcastle United - will see them win the title for the first time since the Premier League's inception.

The Anfield outfit have shown a marked improvement from last season's seventh-place finish and Suarez, who is on course to break the league record of 31 goals scored in a 38-game season, admits their success has shocked the players as much as anyone else.

"It (winning the title) would be something that no one would believe," the Uruguayan told Omnisport.

"Because we have good players but if you look at the complete roster, we don't have (players) to be up there.

"The truth is that we are surprised ourselves at how well we're playing.

"We have good players who are demonstrating why they are in Liverpool and it would be something amazing even to England because of the investment made by Chelsea, (Manchester) City and Arsenal.

"Even Tottenham have spent over £100 million and we, with so little investment, are in that position. It would be incredible."

Suarez pinpointed February's last-gasp 3-2 win over Fulham, sealed by a Steven Gerrard penalty as the game which gave Liverpool the belief that they could be serious title contenders.

He added: "I think that as we were playing, we were starting to realise that we could be at the top [of the table].

"We never had aspirations to be champions, but I think the game against Fulham, that we won in injury time with a penalty by Stevie was a reflection that we can be on top and that with character we can bring up results."