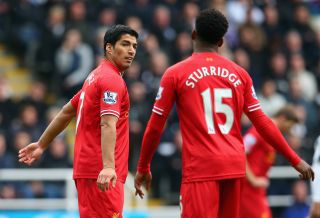 The strike partnership have proved integral to the Premier League side's fine start to the new campaign, which sees Brendan Rodgers' men sat in third place after losing just one of their opening eight fixtures.

And with 10 league goals between the pair so far this term, Suarez is eager to continue their dangerous link-up play as Liverpool have games against the likes of West Brom, Arsenal and Everton looming large on the horizon.

"I am so happy because when you have a very good striker, and a very good partner, for defenders it is difficult because they have to give their attention to two players - not just one," he told the club's official website.

"If maybe two defenders come towards me, this creates space for Danny. This is important not just for me, but for the team and our confidence.

"He is a very good player. He had difficult moments at Chelsea and (Manchester) City, but this is a good time for him and I am so happy with him."