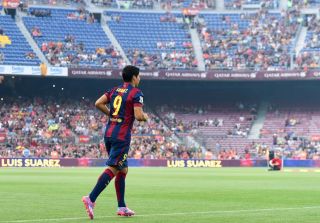 Suarez replaced Rafinha Alcantara with 13 minutes remaining to a rousing reception at Camp Nou, but understandably looked a little rusty on his first appearance since the World Cup.

The Uruguay international arrived from Liverpool for a reported fee of £75 million last month under something of a cloud having been banned from all footballing activity for four months due to his bite on Giorgio Chiellini in Brazil.

However, the Court of Arbitration for Sport last week cleared him to train and play in non-competitive matches - something coach Luis Enrique took full advantage of in fielding Suarez as a late substitute in an easy Trofeo Joan Gamper win.

The new Barca boss - himself afforded a generous welcome from the Camp Nou faithful before kick-off - could also welcome Lionel Messi and Neymar back after their exertions at the World Cup.

And Luis Enrique's side got off to an ideal start when Messi and Neymar both found the target in the opening 12 minutes, before the superstar pair linked up again shortly before the break - allowing the Brazil international, showing few ill-effects of the back injury that cut his World Cup short, to score his second with a nonchalant backheel.

Munir El Haddadi tucked home a fourth early in the second half before Suarez - who will not play in Barca colours again until late October, with his competitive debut potentially coming against Real Madrid - was brought on.

Youngsters Munir and Sandro then wrapped up a comfortable Barca victory in their final match before beginning their La Liga campaign against Elche on Sunday.