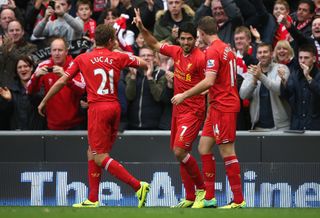 Suarez publicly stated his desire to leave Liverpool in the close-season, with a lack of UEFA Champions League football said to be his primary reason.

This led to interest from Arsenal, who made a bid of £40million and £1 in an attempt to trigger a release clause for the 26-year-old.

Liverpool held firm though, refusing to sell the Uruguayan, and the decision has paid dividends already, with Suarez having netted six goals in three Premier League appearances since returning from suspension.

His latest effort - a hat-trick in a 4-1 thrashing of West Brom - saw the third-placed Liverpool extend their excellent start to the season and, ahead of a meeting against table-toppers Arsenal on Saturday, Rodgers said there was no chance he would have sold the forward to another Premier League team.

"It was something that was never going to happen. I respect why Arsenal wanted to buy a player of Luis' quality because he's one of the leading strikers in the world," said the Northern Irishman.

"But for us, and the institution that we are, we certainly weren't going to sell to a rival or a competitor. That's something we felt very strongly about from the off.

"It's a great credit to the owners and the leadership of the club that they stood by what my thoughts were as a manager and they backed it all the way."

The Emirates Stadium fixture is hotly anticipated, with Arsenal and Liverpool - two of three highest scorers in the league - making superb starts to the season.

And Rodgers is looking forward to seeing how his side respond to the challenge of playing at Arsenal.

"It's two very good teams - Arsenal are an excellent side and score goals. They've got some top players," he said.

"We arrive at the game really confident and with belief off the back of an outstanding performance (against West Brom). The players forgot about it very quickly (though) and thoughts turned to this game.

"The quality of our training this week has been outstanding. We look to take it into the game but it will be very difficult."