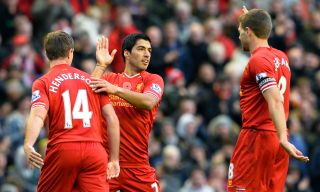 Suarez took his tally of Premier League goals to eight in six appearances this season by scoring twice in Liverpool's 4-0 rout of Fulham on Saturday.

The Uruguay international was last week named on a 23-man shortlist for the FIFA Ballon d’Or, and Gerrard feels his team-mate is well worth his place alongside the likes of Lionel Messi and Cristiano Ronaldo.

"I voted for him in my top three; he got one of my votes," Gerrard told Liverpool's official website.

"Everyone knows how highly I rate him; we're very lucky to have him."

"He is a top lad and works his socks off daily," Gerrard added. "He's probably been one of our most consistent players over the last couple of months.

"So it's thoroughly deserved; I just hope he gets a chance (with England) now because I know he'll take it.

"He loves his football – he's professional and works his socks off in the gym and out on the pitch.

"He's one of those players that you want to do well."