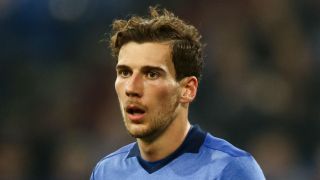 Bayern Munich defender Niklas Sule has no doubt Leon Goretzka will prove a success when he joins the club at the end of the season.

Germany international Goretzka will move to the Bavarian giants on a free transfer after his contract with Bundesliga rivals Schalke expires in June.

The 22-year-old is a natural leader and has all the prerequisites to thrive at the Allianz Arena, according to Sule.

"Leon has been very good friend for many years. I am incredibly happy that he is coming to FC Bayern," Sule told Omnisport and Goal. "I think he is absolutely a leader and he can be that here, too.

"As you have already seen, when he played, he leads the way and I have to say, this is really a very good transfer and I am firmly convinced that he will prevail here."

"Aside from that, it's good that he's staying in the . Leon deciding to sign for is fantastic news." January 19, 2018

Goretzka returned from a stress fracture in his leg to make his first Schalke start in 93 days at the weekend, with fans appearing to hit out at his move to Bayern by holding up a banner in the Veltins Arena that read: "Neither money nor trophies are worth more than our club. The one who does not appreciate that can f*** off immediately."

The midfielder was booed following his substitution in the second half but admitted in the aftermath he expected such a response.

Sule is, of course, far more understanding of Goretzka's desire to join Bayern, but acknowledged why supporters may have been upset.

"You can understand the displeasure of the fans from time to time, but then you should also consider that this is still a player of them until the summer – who was standing in the starting XI last game and it is not conducive to his performance, when he is booed by his own fans," he said.

"That's why I think it's a bit unhappy from the club's side."