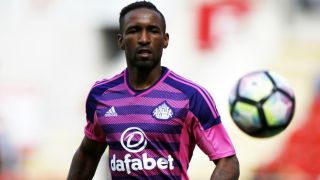 Jermain Defoe is expected to be fit for Sunderland's Premier League opener despite being likely to miss the remainder of his side's pre-season campaign.

Defoe, 33, has not featured in two of Sunderland's friendlies in France after picking up a thigh injury in training.

The forward will undergo scans in the coming days to determine the extent of the problem, but first-team coach Robbie Stockdale is confident he will be back in time for the season opener against Manchester City on August 13.

"Jermain picked up a little thigh strain in one of the sessions," Stockdale explained. "You would do very well to get through pre-season without these little niggles so hopefully – once he's had a scan – we will be able to make an assessment.

"It won't be a long injury and I'm sure Jermain will be keen to be fit for the first game of the season, and we are as well."

He added: "At the moment it's probably too early to say and we don't think it's anything serious, but obviously with a player like Jermain you don't want to take any risks.

"I've been on record before and said that Jermain is a fantastic professional who works hard at his game and his fitness, so there are no issues with that.

"We will work to replicate some of the stuff he can do so he will be out here working and he won’t have his feet up. It's not a problem - we will deal with it and move on."