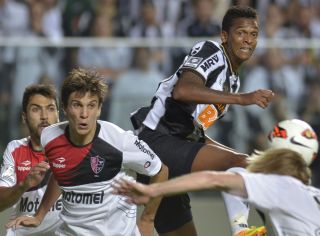 Vergini, a centre-back, joins from Estudiantes, having played all but two of their Primera Division Torneo Inicial games this term.

He joins Fiorentina full-back Marcos Alonso in making a temporary switch to the Stadium of Light in January.

Sunderland are also thought to be chasing a deal for Internacional's Argentine playmaker Ignacio Scocco as they march on in the transfer market despite Roberto De Fanti's recent departure from his role as director of football.

The 25-year-old has one Argentina cap to his name, having featured in a 2-1 friendly defeat to Brazil in September 2012.

Sunderland head coach Gus Poyet recently revealed he had watched Vergini when manager of Brighton and Hove Albion, and had been lining up a deal before his sacking from the Championship club in June.

The Uruguayan commented: "He's a player I know well because we were following him last season in case we went up with Brighton.

"I watched him for about six months when he was with Newell's Old Boys, and the way he plays, understands football and his physical size made me think of him as a potential signing."

Sunderland have reportedly negotiated a deal to bring Vergini to Wearside permanently at the end of the season - should he impress suitably when on loan.

Having started his career in Paraguay with Olimpia, Vergini has also sampled European football previously with a loan spell at then third-tier Italian side Verona in 2010-11.