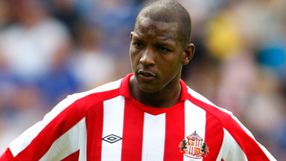 Bramble, 30, was detained by Cleveland police in northeast England on Wednesday.

"Titus Bramble has been suspended from duties, pending the outcome of a club investigation," a Sunderland spokesman told the Premier League club's website.

"The player will not attend team training or be available for selection for matches during this period."

Bramble, who played for Sunderland at Norwich City on Monday, was also arrested in September last year on suspicion of rape after an incident at an hotel in Newcastle but he was subsequently released without charge.