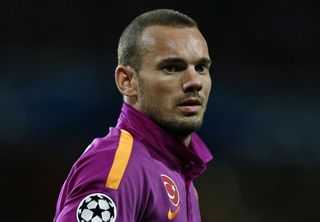 Sneijder's agent confirmed on Wednesday that the Netherlands playmaker had settled a pay dispute with Gala, and the 30-year-old celebrated that resolution in dream fashion with two goals in a frantic finish at the Turk Telecom Arena.

The home fans set the stage for the biggest fixture in Turkish football with a display paying tribute to the controversial Turkish Cup final in 1996, in which then coach Graeme Souness planted a Gala flag in the centre circle following their win over Fener.

Fener were reduced to 10 men in the 53rd minute when Bruno Alves was shown a straight red card for raking his boot down the back of Swiss midfielder Blerim Dzemail.

It took a while for Gala to make their numerical advantage count, with Sneijder finally breaking the deadlock two minutes from time.

The former Inter and Real Madrid man cut in from the left flank and powered an unstoppable effort into Volkan Demirel's top right-hand corner.

Just two minutes later the Fener goalkeeper was beaten by a second stunning strike from Sneijder, who found the other corner with a sublime curling shot to seemingly seal the points for the hosts.

Midfielder Alper Potuk immediately halved the deficit by tapping in from close range, however, Cesare Prandelli's men stood firm to seal the bragging rights for Gala.