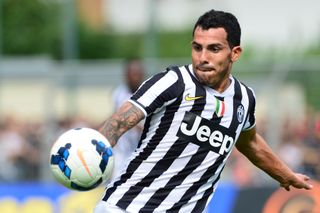 Antonio Conte's side are the current holders of the traditional pre-season curtain-raiser and won their second consecutive Serie A title by nine points last season, finishing six places ahead of Sunday's opponents.

Since then, the manager has added the likes of Tevez, Llorente and Angelo Ogbonna to his squad as they seek to secure a third title in a row.

While they may have finished last in the recent International Champions Cup, ending the competition without a win, Conte believes his side are ready for action at the Stadio Olimpico.

"It has been an intense pre-season so far, but it has certainly been excellent," he said.

"We've worked very hard for 10 days, with double training sessions, and we are pleased with having achieved our target."

The former Juve midfielder has a fully fit 27-man squad to choose from for the clash, with Andrea Barzagli set to be involved despite missing Italy's 2-1 defeat to Argentina on Wednesday due to an Achilles problem.

"We're also very happy from the point of view that we haven't suffered any injuries and we're keeping our fingers crossed that continues," Conte added.

Lazio's Coppa Italia win over city rivals Roma in May ensured they will face the champions on Sunday, with Vladimir Petkovic's side having rounded off their pre-season with a 1-0 win over Premier League newcomers Crystal Palace.

The former Samsunspor boss believes his team will go into the match as underdogs but is confident they can come out on top.

"Finals are not made to play well in - just to win," he told  Lazio Style Radio .

"Juve again this year will be the absolute favourites in Serie A - they have more quality and the best players.

"But, in single games, we are not afraid of anybody and we can play well against everybody. We have made progress, we have been working in this direction."

Lazio, who get their league campaign started on August 25 against Udinese, have seen striker Louis Saha retire during the close-season while captain Stefano Mauri was banned for six months due to his part in a match-fixing scandal.

However, they have been boosted by the addition of midfielders Lucas Biglia and Felipe Anderson from Anderlecht and Santos respectively, while they have retained in-demand duo Hernanes and Antonio Candreva despite plenty of speculation regarding their futures.

Petkovic, who saw his side draw away at the Juventus Stadium last season before losing at home in the reverse fixture, added: "The squad has been completed and we can make a good impression."

Lazio have not won the Supercoppa since 2009, when they defeated Inter 2-1.

Juventus will hope for a similar result to last year's final, when they overcame Napoli 4-2.