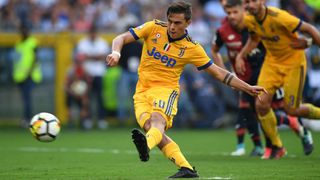 Juventus legend Alessandro Del Piero saluted Paulo Dybala's incredible start to the season, calling the Argentinian a "superstar" who has the ability to stay at the club until he retires.

Dybala has looked destined to become one of the world's best strikers ever since he joined Juve from Palermo in 2015 and is on course for his best season yet.

The 23-year-old already has 10 Serie A goals from just seven appearances, leaving him only one short of his tally of 11 from last term and nine off his best haul from the previous campaign.

And Del Piero believes the Argentina superstar is unrivalled in the eyes of Juve fans.

"He's raised his level even further at the start of this season," Del Piero told Gazzetta dello Sport.

"I hope he can have what I did [in terms of adulation] in Turin, because no-one can enter the hearts of the fans like him.

"The number 10 [jersey] wasn't really my property. Before me was Roberto Baggio, [Omar] Sivori and [Michel] Platini – they all wore it.

"And now there's a superstar who has everything to stay at Juve for life if he wants to. I'm so happy."