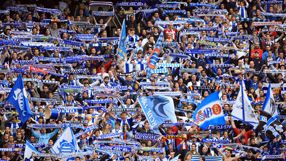 Atletico Madrid climbed to sixth place after a Sergio Aguero double enabled his side come back to beat promoted Real Socieded 4-2 away in the late game.

Sevilla had earlier missed out on the chance to climb into the Champions League qualification places when they fell to a late Pierre Webo goal, and went down 2-1 at home to Real Mallorca.

Barcelona-based Espanyol have 22 points from 12 games, two short of third-placed Villarreal, who drew 1-1 at home to Valencia on Saturday.

Real Madrid top the standings with 32 points after a 5-1 thrashing of Athletic Bilbao on Saturday when Barcelona moved on to 31 points with an 8-0 demolition of Almeria.

Valencia are fifth with 21 and Atletico stepped up to sixth with 20, the same as seventh-placed Sevilla.

Espanyol maintained their 100 percent home record after Joan Verdu finished off a swift counter-attack from a Hercules corner in the 15th minute at Cornella-El Prat.

Argentine striker Pablo Osvaldo doubled the lead from the penalty spot 10 minutes from time when Hercules goalkeeper Juan Calatayud brought him down for a penalty to earn a red card. Luis Garcia converted a second penalty at the end.

Atletico were trailing at Anoeta when Tomas Ujfalusi helped Joseba Llorente's shot into his own net after 12 minutes, but they turned it round late in the second half.

Uruguay's Diego Forlan levelled after a wonderful piece of skill from Aguero in the 72nd and the Argentine then scored twice in four minutes.

Diego Rivas pulled one back for the hosts in the 85th after an error from Simao Sabrosa, but the Portuguese made amends scoring an injury-time penalty after Jose Antonio Reyes was brought down in the area.

Sevilla fell behind at the Sanchez Pizjuan when Mallorca's Michael Pereira netted at the near post on a counter-attack in the 36th minute.

The hosts gradually came back and Brazil striker Luis Fabiano looked to have grabbed a point when he struck two minutes from time but Mallorca's Cameroon striker Webo rose to head the winner at a free-kick on the stroke of full-time.

Elsewhere, Chilean coach Manuel Pellegrini's winning start at Malaga came to an end with a 3-0 defeat at Deportivo La Coruna.

Ecuador striker Felipe Caicedo scored twice as Levante climbed out of the relegation places with a 3-1 win at home to Racing Santander, and Osasuna beat Sporting Gijon 1-0 at home.