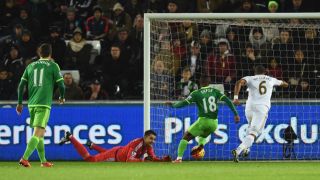 Sunderland came from behind to beat 10-man Swansea City 4-2 thanks to Jermain Defoe's hat-trick, but the match was dominated by questionable refereeing decisions.

Gylfi Sigurdsson then scored from the penalty spot after 22 minutes when Wes Brown was adjudged by referee Graham Scott to have impeded Andre Ayew in the box.

Scott, a late replacement for Andre Marriner, was making just his fourth Premier League appearance and harshly sent off Kyle Naughton for a high boot on Yann M'Vila after 37 minutes.

Sunderland were level shortly after half-time when Patrick van Aanholt's shot took a wicked deflection off Federico Fernandez and flew into the top corner.

Defoe then defied the assistant referee again, sweetly finishing off Adam Johnson's throughball, before Angel Rangel saw a strike ruled out for offside and Defoe completed his treble by tucking in Van Aanholt's low cross.

Both managers rotated their squads after weekend defeats in the FA Cup, with Leon Britton making his 500th Swansea appearance.

The game began at a frantic pace and Sunderland took the lead inside three minutes - Defoe scoring for the third Premier League match in a row against Swansea.

The hosts were handed a soft penalty when Brown was deemed to have bumped Ayew over in the box, but contact was minimal and the Ghana international seemed to kick the ground and trip himself. Sigurdsson stepped up to send Vito Mannone the wrong way and level the scores.

Sunderland's hopes of securing their first win at Swansea since 1963 then got a huge boost when Naughton saw red for catching M'Vila, although the defender appeared to get the ball.

Despite being reduced to 10 men Swansea took the lead after 40 minutes. Fabianski claimed a high ball and found Ayew with a long clearance. The forward had a lot to do but shrugged off Lee Cattermole and hammered a low finish across Mannone for his seventh Premier League goal.

Sunderland levelled the scores within four minutes of the restart when Van Aanholt cut inside and hit a powerful drive that flew into the top corner via a deflection off Fernandez.

Jeremain Lens was then inches away from putting his side ahead, but his low shot from a tight angle cannoned back off the face of the post.

That miss was forgotten moments later when Defoe raced on to Johnson's pass to beat Fabianski easily to score his second, although the striker again looked just offside.

Swansea thought they were immediately level when Angel Rangel capitalised on poor Mannone goalkeeping to slot home, but this time the offside flag went up and the goal was disallowed.

The officials were having a torrid time and Defoe had the ball in the net for a third time on 70 minutes, only for the assistant to correctly raise his offside flag.

Sunderland sealed the points with five minutes to go when Van Aanholt pulled the ball back for Defoe to slot in his hat-trick goal.

The visitors held on for a crucial win - their second away victory of the season - that lifts them above local rivals Newcastle United into 18th place and within a point of Swansea.