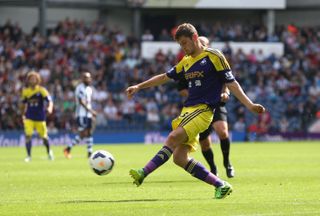 The Wales international sustained the injury during Swansea's 4-0 Premier League win over Sunderland, with the club confirming he is likely to be out of action for between three and four weeks.

Davies has made 12 appearances in all competitions this season, scoring twice, and is set to undergo immediate treatment.

"I went up for a challenge in their box early in the first half and I landed awkwardly," the 20-year-old told the club's official website.

"I managed to play on for nearly 30 minutes but I knew I had to come off.

"I am disappointed but I just have to do my rehab now and come back as soon as possible."

Davies has been unfortunate with injuries this season, having also missed Wales' final FIFA World Cup qualifiers against Macedonia and Belgium with a hamstring problem.

His ankle sprain could rule him out for six games, while he is also likely to miss the all-Welsh clash against rivals Cardiff City in November.