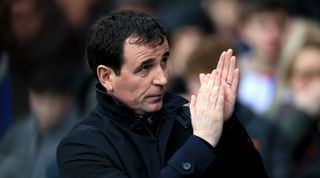 The League Two club have also appealed for information to help identify other fans who threw objects onto the pitch during Saturday’s 3-1 defeat to Blackpool at Rodney Parade.

After the visitors scored their third goal of the match in the 95th minute, Tangerines boss Bowyer was struck in the face by ‘a bottle and hard-boiled sweets’ thrown from Newport's Hazell Stand.

Newport have confirmed that the boy has been given a club ban for his troubles.

Ex-Villa duo Nigel Reo-Coker and Luke Moore might be back together again... in Norway

Bowyer said after the game: "It is a disgrace, an absolute disgrace.

"All we were doing was celebrating a hard-fought win with that third goal and then the missiles came.

"There were sweets, hard-boiled sweets, I think there was a bottle, and there was lack of stewarding.

"One hit me right on the lip, and I wouldn’t mind but it wasn’t my favourite flavour.

"But, in all seriousness, there has to be action taken. You can’t have that."