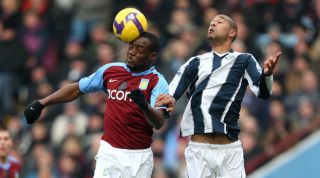 Reo-Coker, 32, and Moore, 31, have been without clubs since the start of the 2016 Major League Soccer season – but that could all be about to change.

The next step in their adventures could see the pair earning contracts with Norwegian side Lillestrom, who they are training with.

They were team-mates at Aston Villa for just over half a season in 2007/08, before Moore joined West Brom on loan.

Furious brawl breaks out at children’s game in Mallorca

Reo-Coker, a former England U21 international, has played for Vancouver Whitecaps, the now-defunct Chivas USA (whom he joined three months after Moore left) and Montreal Impact.

Moore began his career at Villa and made his first-team debut in 2003, before signing permanently for West Brom in summer 2008 and later playing for Derby (loan), Swansea and Elazığspor. After just two-and-a-half months at Chivas he was traded to Colorado Rapids, who in turn traded him to Toronto where he stayed put for two seasons.

“It will be interesting to see what kind of condition they are in,” Lillestrom manager Arne Erlandsen told Norwegian newspaper VG.

“Now we get to see the players in training. Time will tell how long they stay here.”