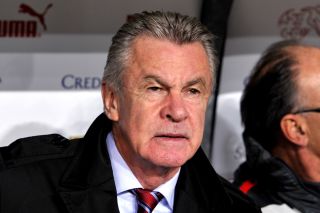 Hitzfeld, 64, took over from Kobi Kuhn in July 2008 following Switzerland's failure to go beyond the group stage at the UEFA European Championships that same year.

However, qualification for next year's World Cup was secured as Switzerland topped their qualification group without losing a single game.

Switzerland will go into the World Cup as seeds after they moved into the top 10 of the most recent FIFA rankings, but the tournament will be Hitzfeld's last in management.

"After the World Cup in Brazil, I will be 65," Hitzfeld said.

"After 30 years in the strength-sapping world of football, my time has come to stop.

"I can live without football, there are more important things in life."

Hitzfeld's three-decade spell in management has seen him coach in both Switzerland and Germany.

The former Germany international won two league titles and a UEFA Champions League crown with Borussia Dortmund, the latter coming in 1997 with a 3-1 win over Juventus.

However, his most successful spell came with Bayern Munich, where he again won the Champions League and four Bundesliga titles between 1998 and 2004.

Hitzfeld returned to Bayern in 2007, guiding the Bavarians to another league title before linking up with Switzerland.