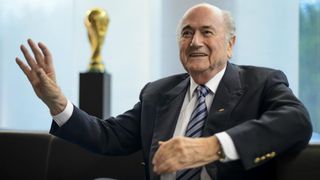 Switzerland should be "grateful" to disgraced FIFA president Sepp Blatter, while world football's governing body will struggle to replace the Swiss, according to his ex-wife.

Blatter is serving an eight-year ban after FIFA's ethics committee found him guilty of making a "disloyal payment" to UEFA president Michel Platini in 2011, a verdict handed down last month.

The 79-year-old Blatter, who is appealing the decision, is alleged to have authorised a payment of two million Swiss francs (£1.3million) from FIFA to Platini.

However, Blatter's former wife - Graziella Blatter-Bianca - has leapt to the defence of the outgoing president, who is set to be replaced in February having led FIFA since 1998.

"When Sepp Blatter was suspended for eight years for acts that still must be proved, he should also have been given a bonus of 20 years for all the good he did for football," she told Blick.

"That means: 20 minus eight years. He should be allowed to stay in office for another 12 years. Really, he would deserve even more years, but given his advanced age 12 is realistic."

Blatter-Bianca added: "I saw everything that he gave to his job. FIFA will find it difficult to find someone who does as much. Switzerland should be grateful to him."