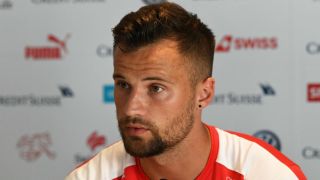 Haris Seferovic claims Switzerland are capable of reaching the final of 2016 as Poland's Michal Pazdan remembers an important lesson in humility ahead of their meeting in the round of 16.

Both countries have advanced to the knockout stages of the European Championship for the first time, Switzerland claiming second in Group A behind France courtesy of a win over Albania and draws with Romania and the hosts.

They narrowly avoided a daunting match against the world champions, but are nevertheless wary of a Poland side headlined by Bayern Munich striker Robert Lewandowski.

"We could have got Germany, but Poland are [also] very difficult to play," Seferovic was quoted as saying by UEFA's official tournament website.

"We have showed our qualities so far, but we have to stay positive, work hard and we'll see what happens on Saturday.

"We're not looking far ahead, but everything is possible, even the final."

The Eintracht Frankfurt striker started the first two games of the pool stage before making way for one of the national team's emerging stars.

"I wasn't disappointed about being left out against France," he said.

"Breel Embolo did very well. It was the right decision to play him. I'm training very hard and am confident I'll start scoring soon. I haven't had much luck so far."

While Seferovic was not willing to discount the admittedly optimistic possibility of going all the way to the decider in Paris on July 10, Poland's Pazdan can draw on painful memories of how quickly a reversal in fortunes can occur.

"I played for Gornik Zabrze and in the next season we were relegated and I had to play in [the] second division. So I know in football one second you are at [the] top but you can fall down quickly. Football teaches you to be humble.

"It will be a tough game. We have seen [Switzerland's] their matches, they hold the ball very well, they have a few really good players. It is the last 16 so we must be extremely focused. Tactics and preparation will play a crucial role."

Fabian Frei, meanwhile, sounded the same note of cautious optimism as Seferovic ahead of the clash at Saint-Etienne's Stade Geoffroy-Guichard.

"They might not be as big a name as Germany, but Poland [have] proved how strong they are ... Lewandowski is their biggest player, but other members of their squad play for clubs in some of the best leagues in Europe," he said.

"We respect them, but we're not scared."

Poland, who claimed second in Group D following wins over Northern Ireland and Ukraine either side of a 0-0 draw with Germany, are likely to be without Wojciech Szczesny.

The goalkeeper missed the 1-0 win over eliminated Ukraine with a thigh problem and, should he fail to recover, Lukasz Fabianski will continue to deputise after recording the team's third consecutive clean sheet of the competition, building on the early work done by his former Arsenal team-mate.

Young midfielder Bartosz Kapustka is suspended, while Switzerland have a clean bill of health and no players suspended.

- Switzerland have won only one of their 10 games against Poland, a friendly 40 years ago (2-1 in May 1976).
- All three games played in Saint Etienne at Euro 2016 have ended in a draw.
- Both Switzerland and Poland have made it to the knockout stages of the European Championship for the first time in their history.
- In 12 European Championship games, Switzerland have scored more than one goal on only one occasion (2-0 v Portugal, 15 June 2008).
- Switzerland's two goals at Euro 2016 have been scored from corners. Out of the 16 teams who have made it to the knockout stages, they are the only one yet to score from open play.