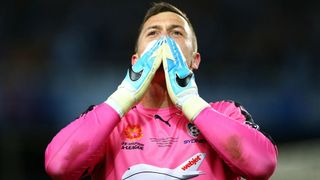 Vukovic's penalty save from Marco Rojas on Sunday allowed Milos Ninkovic to hit the winning spot-kick as Sydney grabbed a 4-2 shootout win over Melbourne Victory in the Grand Final, after 120 minutes of action had finished in a 1-1 draw.

The goalkeeper had lost on his previous three Grand Final appearances across stints with Central Coast Mariners and Perth Glory, but ended his long wait by denying Victory, the club he played for last season.

"I have wanted this for 12 years and it has finally happened," Vukovic, 32, told Fox Sports.  "It is an amazing feeling.

"I don't know what I would have done if I had lost a fourth. The emotions are running high and it still has not sunk in.

"That whole penalty shootout was a blur. It just went so quickly.

"I think we have to thank [goalkeeping coach] John Crawley for the amount of study he put in. He studied [all of Victory's penalty takers] and he was sending me signals the whole shootout.

"He knew where they all went with their last penalties. That is usually a good indicator of where they are going to go again. There were a couple he didn't know, Leigh Broxham and Carl Valeri, but the others he pointed them out and he was right.

"It has been a pleasure playing for this team, with this group of boys. You can see out there we fight for each other and we have done all season."

Sydney had dominated the regular season, losing only once and finishing the campaign 17 points clear of nearest challengers Victory.

"I am so grateful that we won and we have done it in style," added Vukovic. "We thoroughly deserve this championship and we are going to celebrate now.

"We rode our luck [in the final], they hit the post twice, but it just felt like it was meant to be.

"After breaking so many records it would have been a travesty if we hadn't gone on to win it as people would have probably not recognised what we have done this season. To win is huge and caps off a massive season for this club."